We were up early and relaxed before heading down to breakfast. We packed up, checked out and made our way to Finlaggan. This was the ancient seat of the Lordship of the Isles from 1329 – 1493. The island is named Eilean Mor and on it there is a chapel ruin with 4 graves, a 16th Century house ruin and a scattering of ground stones representing some of the 20 buildings that existed here in Medieval times. We then went to Caol Ila which was established in 1846. We drove alongside the water, opposite Jura to Bannahabhain – pronounced Bannahavain. Established in 1881 this distillery has a stunning view but the staff were not that engaging! On the drive back we spotted a golden eagle. We got to Port Askaig an hour early! We walked around the port, bought crackers at the shop and had espressos at the hotel. The hotel, shop, ‘garage’ (one fuel pump) and self catering cottages (2) are owned by Iain and Marion Spears. They have a captive market! The place could do with some TLC and a friendlier attitude. We are on the same ferry as on the way here. The staff work 2 weeks on and 2 weeks off, living on the ferry while in port. The hotel must do a thriving business from the crew each night. We had lunch in the cafeteria of the Hebridean Isles and then espressos in the coffee bar. We spent a lot of time on the deck basking in the sunlight. We watched the bow lifting when we docked at Kennacraig and drove off the barge at 15:10 with the weather a warm 18 degrees. We followed the route we came in, until Adrishaig, where we turned off for Oban. We stopped to look at the Kilmartin crosses from 900 and 1200AD which were found in 1860 and the 23 stones which date from 1200 – 1712. We then drove past an unmarked standing stone just before Ardfem. We arrived in Oban just before 5 and parked alongside a slew of B and B’s and hotels. We chose the Corriemar Hotel for the night. We took an hours walk through the town, gazed up at McCaig’s Tower and had a half pint each at Coasters. Doom bar Cornish ale for Dave and Belhaven best for me. Dinner was at Oban Fish and Chips as Rick Stein said it was the best fish and chips he had ever had (in 2002). We had 500g of mussels to share and a fish platter for 2. This consisted of generous portions of sole, hake, cod, halibut and haddock which were all excellent. Plus a plate of chips each, and sides off tartare sauce, coleslaw and mushy peas. Our last stop was at Coasters for a tot each of Speyburn 10 year old.

We’ve woken early to grey skies and overnight rain. It’s windy and drizzling and set to be a cold day. We had an amazing breakfast of croissants, fresh fruit and scrambled eggs with Scottish salmon. We are changing rooms tonight so I’ve had to pack up again! We started our morning at Bowmore which was established in 1766. In 1940 production stopped for the duration of the war as the distillery was commandeered by RAF coastal command. The most notable bottles here are the 12 54 year old’s. We had a wee dram of the small batch before walking around a bit in the rain, visiting the information centre and shopping for lunch. Fuel here costs £1.189 and we put in £20 before heading on our trip around the Island. Our next stop was at Bruichladdich where we had espressos at the mini market before going to the distillery. It was established in 1881 and their barley is malted at Port Ellen Maltings which was once a distillery. Keeping in mind that phenolic content comes from peat, the Port Charlotte has 40 ppm. The barley comes from Octomore Farm and this is the name of their heaviest peated whisky. Our tasting started with the Bere Barley 2008 – the barley comes from Orkney and is unpeated. Then we tasted the Port Charlotte which is Islay barley. Our last tasting was the Octomore (Ochdamh-mòr) which is aged for 5 years and improved with the addition of water. The distillery was closed in 1994 by the then owners who left all the barrels in the warehouses. It was reopened in 2001 and their iconic turquoise colour is meant to be the colour of the seawater the day they reopened. I bought a dinky bottle of The Botanist Islay dry gin which is from 22 foraged island botanicals. We then drove along the rugged coastline to Portnahaven in search of the Celtic stone before Lossit. We could not find it. Strangely we could not pick up BBC Scotland, but we could get BBC Ulster. We had to coerce the cows to move off the road where they were grazing. Our drive took us through Kilchiarn back to Port Charlotte. We pulled off the road and had lunch before heading to Kilchoan – an Islay farm distillery owned by an English family. The distillery is on Rockside Farm and was established in 2005. There is a long list of distilleries that have closed including Mullindry Distillery build by John Sinclair in 1826. This closed in 1831. We had espressos at the coffee shop before doing a tasting. We started with the 100% Islay which has 25ppm and is a 5 year old aged in Bourbon casks. It has white chocolate on the palate and a citrus finish. We then had the Machir Bay which is 50ppm and aged in a mix of bourbon and sherry casks. This is a classic malt with lovely smoke in the taste. Our final taste was the Loch Gorm, aged in Ola Rosa sherry casks and has a great taste of sweet dried fruits. The tasting costs £5 which is not too bad as we shared the tasting and it was enough. We did our tasting with 3 Danish guys who told us that only 2 people live in Port Askaig and that there are 4 policemen on the whole of Islay. As we left, we drove down to Machir Bay and then past a coastal defensive structure before looking for the Ballinaby standing stone, which we did not find. We did find Maclean’s cairn which is from the 1500’s. Before Arsnave farm is the Kilnove ruin and commonwealth war graves. Our route took us to Mulindry and then back to Skerrols House for some R&R. Dinner tonight was at The Bridgend Hotel and Restaurant. On our way back to Skerrols House we followed a hare down the road who ran and stopped and ran some more, in front of us the entire length of the road. It was quite charming. 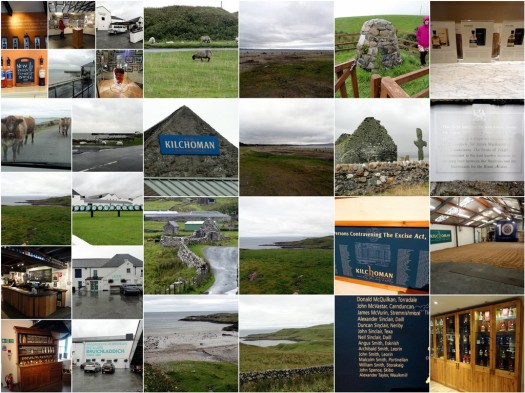 Woke up bright and early, had breakfast, packed and tidied up and left for Islay at 8:25. A bit later than planned but with still enough time to stop along the way to the ferry. We headed towards Campbeltown past Loch Long where Farslane is situated. This Loch is open to the sea and therefore salt water and tidal. It leads to the Firth of Clyde which is the main sea route to Glasgow. We went past Loch Goill and stopped at Loch Fyne Oyster Bar, Restaurant and Delicatessen. We had espressos and Scottish tablet. This Loch is the longest in Scotland and was once full of herring and oysters. Due to overfishing there are now only aquaculture fishing enterprises for oysters and salmon. We stopped in Inverary at the harbour and drove up to the Castle. The £10 entry fee meant we did not go in. We put £10 fuel into the car. It costs £1.139/l! We bought rolls and an apple at Londis. At 39p it better be a good apple. At 11am the weather turned windy with warnings that ferry services might be affected. We drove the Kintyre Trail and stopped at Tarbert which is a working harbour. The Castle’s ‘keystone’ was used to build the harbour once the castle fell into disrepair in the 1400’s. We had espressos and shortbread at Cafe Ca’ Ora before heading past the West Loch to the Island Ferries. Kennacraig is just a ferry terminal and we caught the Eileanan Innse Gall to Islay. There were lots of long swells on the way. We got off at Port Askaig where the weather was windy but warm (18 degrees). We then drove from the North of the island southwards to Port Ellen. Just after the airfields are the Laphroaig peat fields. Peat is harvested from April to September and left to the elements to provide the smoke needed for the whisky. Our first stop was at Lagavulin which was founded in1816. This is nothing more than a whisky store and not worth the stop unless you want to do a tour. Next stop was Ardbeg, founded in 1815. There is a wash still at the entrance. The shop is good, but the prices the same as at home. The coffee shop staff are totally disinterested in helping us, so we make our way to Laphroaig. Also founded in 1815, however they were probably making whisky long before that. This is the only alcohol which could be sold during prohibition in the United States as it was sold for medicinal purposes. We claimed our rent on our land and then tasted the 10 year old against the Triplewood. This is a blend of the PX and QA sherry wood whisky’s which are then placed into virgin oak. We bought a bottle for £42.90 less my birthday discount. We also were given 2 miniatures of the 10 year old as rent! This is the only whisky to hold a Royal warrant and the estate was privately owned until 1968. Well worth a visit to walk around the museum, have a tasting or do a tour. We drove back alongside the Mull of Oa and turned down towards
Scarrabus and checked in at Skerrols House. We are in the king room tonight and it’s luxurious to say the least. We relaxed and then headed to Port Charlotte to have dinner at the restaurant at the Port Charlotte Hotel. The sheep roam freely here and graze in open, unfenced fields along the water. Dinner was fantastic – a review to follow on my blog.