As a point of interest, Argyll means coastland of the Gaels. In 1891 the Highland Association was formed in Oban. I did not sleep well last night. This is a recurring pattern for the last night of our holiday. We were out of bed early, packed and went down for breakfast. We then took a slow walk, stopping for espressos at Dolce Vita before going to the Oban Distillery. It was founded in 1794, first brewing ale, and was instrumental in the development of Oban’s industry. We then check out and made our way to Inverawe smokery where we bought smoked salmon pâté for lunch. We did the riverside walk to a small loch where you can do some trout fishing. We headed down the road past Loch Awe which is used for hydro power. We then drove pas Loch lubhair again before going on a new route to Loch Earnhead. The soles of Dave’s shoes had broken off, so we put them in the clothing bin. Hopefully they get donated after being glued back on, and not chucked away. We drove through Comrie which is really pretty and stopped at the Famous Grouse experience. This is at the Glenturret distillery which is Scotland’s oldest distillery having been established in 1775. Our next stop was meant to be Stuart glass factory but there were no signs in Crieff where it was. We followed a narrow track down to a Pictish stone – we took a photograph of the replica as the original is in a Church. Next stop was for fuel – just £5 to get us back to Edinburgh. (1.079) at Tesco’s fuel. We parked in the old part of Perth’s city centre and I bought treats at Thornton for Dave and I and Dave bought a new razor foil at Boots. We then headed for the airport which is really well signposted. We got the car Bach at 15:05 – 5 minutes before we clocked over to the next day. So the delay picking up the car should mean a day less of charges. We checked in, went through security and tasted the Laphroaig an Cuan Mor – the big sea. Full of sea salt and peat. Will look for this at home. In the lounge I had a Spey 12 year old and Dave had a glass of Merlot. The flight was delayed due to a flock of birds on the runway. This did not affect us at all as we had plenty of time to waste in Paris. There were lots of well armed army personnel and security has been beefed up a lot since our arrival in Paris! Once through security we tried the Grey Goose toasted wheat vodka which was really good. Pre dinner treats were Ladurée macarons. Pistache and citron for Dave and fleur d’oranger and café for me. We bought tomate sechée piment a espelette from Maille and after walking through the shops had a brief sit down before getting on the plane. 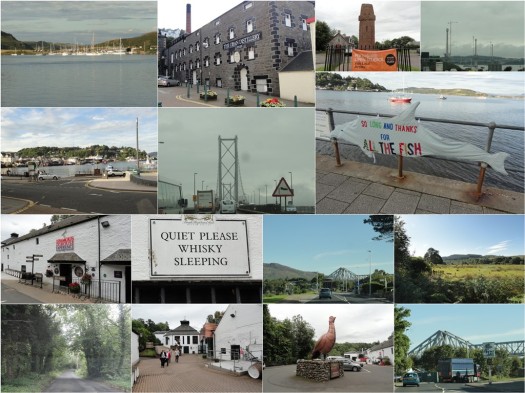